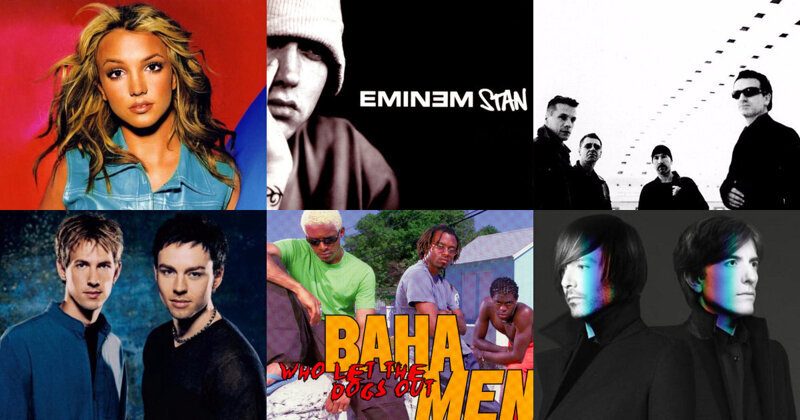 What were you listening to in 2000? 20 years ago, as the world was welcoming the new Millenium, the music industry too had many exciting works, such as rapper Eminem’s ‘Stan’, U2’s ‘Beautiful Day’ and teen pop idol Britney Spears’ ‘Oops!... I Did It Again’.

Likewise, Savage Garden’s ‘I Knew I Loved You’ found phenomenal fame in 1999 that continued all through to the millennium.

Here is a flashback to the best hits of the year 2000.

After the massive success of her 1999 debut album, teen idol Britney Spears followed up with a second album Oops!... I Did It Again featuring the same-name track singing about a girl who sees love as a game. The song not only topped the charts in 15 countries, it won Britney the Best Female Pop Vocal Performance in the 2001 Grammy Awards.

The red bodysuit that Britney wore in the music video has since become an icon, with Miley Cyrus paying homage to the attire in her 2019 ‘Mother’s Daughter’ music video. Besides the sexy dancing, the other highlight that has since become a classic is the Titanic movie-inspired dialogue between Britney and the lovelorn astronaut.

As a symbol of love, the astronaut painstakingly retrieves the ‘Diamond of the Ocean’ from the sunken Titanic but is met with a mere, “Aww, you shouldn’t have”. Till today, bands and singers such as Fall Out Boys and Anne-Marie have made references to ‘Oops!... I Did It Again’ in their songs, which is evidence of the classic status of this hit song.

One of Eminem’s best works is undoubtedly his third album The Marshall Mathers LP. Despite the album’s controversial treatment towards women and homosexuals, it sold a record 21 million worldwide, making it one of the best-selling albums in history. It thus put rap music firmly in the mainstream and marked an epoch in the hip hop music scene.

The song ‘Stan’ depicts a homicidal obsessed fan Stan who writes to his idol to no avail. Tragedy unfolds when love turns to hate; Stan loses his mind and kills himself in the end. The plot in the lyrics stirred great controversy during the time and the term ‘Stan’ was even added to Webster’s Dictionary to refer to an over-enthusiastic fan. As a follow-up to ‘Stan’, Eminem released ‘Bad Guy’ in 2013, a story about the revenge Stan’s brother exacted.

In the 2001 Grammy’s, The Marshall Mathers LP took home the Best Rap Album prize and at the ceremony, Eminem invited Elton John, who is openly gay, for a duet performance of ‘Stan’ to quell rumours of his anti-gay stance. The two later became good friends.

The saccharine sweet lyrics “I knew I loved you before I met you” essentially make this a bona fide wedding song. From the Australian duo Savage Garden’s second album Affirmation, the song ‘I Knew I Loved You’ went on to nab the group’s second number one in Billboard Hot 100.

For the next 12 years, no Australian singer or group would attain the same feat, which is proof of the group’s huge popularity back then.

Though released in 1999, the song continued its popularity streak in 2000, with a formidable seventh place on the Billboard charts.

The music video starred Spiderman’s Kirsten Dunst as the love interest of Savage Garden singer Darren Hayes and related their encounter on the New York subway. The romantic story, coupled with Hayes’ beautiful singing, is the epitome of innocent love.

The lead single on Irish rock band U2’s 2000 album All The You Can’t Leave Behind, ‘Beautiful Day’ was such a huge commercial hit it won U2 the Song of the Year, Record of the Year and Best Rock Performance by a Group in the Grammy Awards the following year. The authoritative Rolling Stone also ranked it number nine on its list of definitive songs between 2000 to 2009.

The song was performed in the 2002 Super Bowl Halftime Show and the hopeful lyrics gave the year its much-needed optimism, especially after the 9/11 terrorist attacks in America.

Bet you had the tune in your head when you saw the song title. The earworm of a soundtrack ‘Who Let The Dogs Out’ is the emblem of Bahamian band Baha Men. The song shot to fame after its feature in Rugrats in Paris: The Movie. The song not only topped the Australia and New Zealand charts, it also bagged UK’s fourth best-selling singles in 2000. It went on to win Best Dance Record in the 2001 Grammy’s, and continues to be played on radio and in major sports events.

Originally sung by Trinidad and Tobago musician Anslem Douglas and titled ‘Doggie’ in 1998, Douglas clarified that this song has nothing to do with canines but is a pointed sarcasm at men. The lyrics describe men and women in a party and how men tend to use insulting words like ‘slut’ and ‘skank’ to objectify and degrade women. As a retort, the women should go: “Who let the dogs out?”.

Adapted from the same-name novel, The Virgin Suicides is a highly-revered movie of its time and the anticipated debut of director-auteur Sofia Coppola. French electronic music duo Air, which rose to prominence after their first album Moon Safari, composed the score for the film. For the theme song ‘Playground Love’, frontman of the Phoenix band, Gordon Mars, lent his vocals to the beautifully-haunting music score by Air, and the saxophone added a nice touch to the music. The song was nominated for Best Soundtrack in the Brit Awards the following year.

Interestingly, the collaboration did not just inspire the amazing music but facilitated the union of Thomas and Sofia. The pair got married in 2011 afteran extended period of a long-distance relationship.

Head on to KKBOX to hear the International Hits of 2000.

Who Let The Dogs Out

All That You Can't Leave Behind