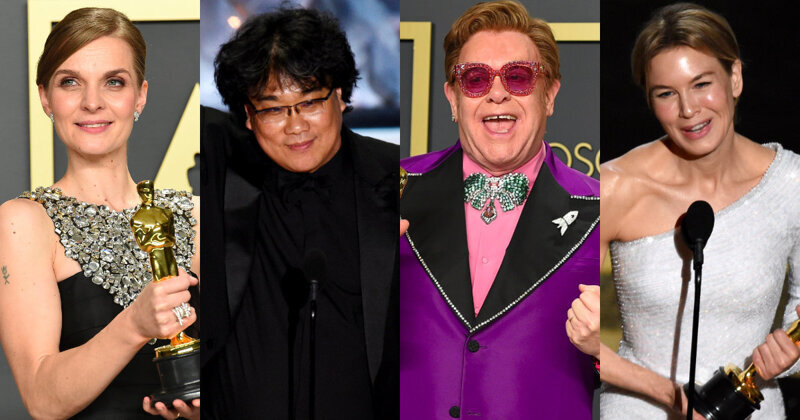 The 92nd Oscars will be remembered as a night where history was made.

South Korean movie 'Parasite' is the first non-English film to win Best Movie. Composer Hildur Guðnadóttir is the fourth female to winthe Best Original Score for her music in 'Joker', the first female in 23 years.

As critics predicted, Best Actor went to Joaquin Phoenix for 'Joker', and Best Actress went to Renee Zellweger for 'Judy'.

was the night's big winner, nabbing four of its six nominations.

“We never write to represent our countries,” director Bong Joon-ho while acceptingthe screenplay award. “But this is (the) very first Oscar to South Korea. Thank you.”

There were no surprises for this year's major acting awards.Best Actor went to Joaquin Phoenix for 'Joker'and Best Actress went to Renee Zellweger for 'Judy'.

The pair'scritically acclaimedacting won over judges across the film festival circuit, Oscar's judging panel was no exception.

Renee took the opportunity to honour Judy Garland, the American singer-actress who she played in thebiographical drama film 'Judy'. She said: "I have to say that this past year of conversations celebrating Judy Garland across genders and … I’m sorry, it’s across generations and across cultures has been a really cool reminder that our heroes unite us. "

Joaquin gave an emotionally charged acceptance speech, expressing his gratitude for many "in this room" who have given him a "second chance".

He also talked about making use of films for a good cause.

"I’m full of so much gratitude now. I do not feel elevated above any of my fellow nominees or anyone in this room, because we share the same love – that’s the love of film. And this form of expression has given me the most extraordinary life. I don’t know where I’d be without it.

"But I think the greatest gift that it’s given me, and many people in [this industry] is the opportunity to use our voice for the voiceless."

Elton John beat out Frozen 2's 'Into The Unknown',winningBest Original Song with the Rocketman's 'I'm Gonna Love me Again'.

Elton brings home his second Oscar trophy, previously winning the honours in 1994 for The Lion King classic 'Can You Feel The Love Night'.

The Icelandic composer is the fourth woman to win Best Original Score in the history of Oscar.

Hildur's acceptance speech was a rallying call forwomen worldwide. She said: "To the girls, to the women, to the mothers, to the daughters who hear the music bubbling within, please speak up — we need to hear your voices."

Best Supporting Actor
Brad Pitt – Once Upon A Time In Hollywood

Best Production Design
Once Upon A Time In Hollywood

Rocketman - Music From The Motion Picture